Music composer and jazz pianist. You can also find me doing some sound production or programming some kind of interactive music. 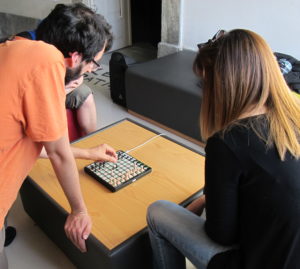 I have some interest in any form of interactive music, that is, music which is not written from the beginning to the end. Maybe jazz has been my source of inspiration for this, but I look for interactive by other means, like digital media or Sound Painting. With this in mind, I’ve created the interactive installation Xadrez 1, which I’ve taken to the Bineal de Cerveira (Portugal) and the Semibreve Festival of Braga (Portugal).

I have also had the opportunity to compose and showcase some contemporary music at several venues, like the Teatro Helena Sá e Costa and the Café-Concerto Francisco Beja. I also never have left my passion for jazz, which led me to have my Big Band Grumpy Levy composition to be premiered at Casa da Música, where I was honoured to play, and to participate in some other projects, like the band Pi Graos, the jazz choir Coro da Rá and my own choir, Vía Sete.

Where I come from

My mother knew I should study music when, before knowing how to tie my shoes, I could guess the name of composers of films or radio by ear. When I could, I started to study music. I have been studying jazz piano and when I was on legal age I decided to study music and sound for audiovisuals, so I got enrolled in the Audiovisual Communication course. That led me to work at the sound facility Cinemar Films, and later, to introduce audio editing techniques in my music.

On the other hand, I began to work in music as a social transforming tool with XENEME, where I could develop the most personal project I’ve made, the amateur choir Vía Sete.

Some things I can do…

…and titles I possess

I think music is made to go outside. I like to be into music activities, and I love to have people around when I’m composing.

On the other hand, I like to see music as a transforming tool. Music is not only on paper nor in concerts and recordings. Music is transforming, you can play (with) it, it can be a medium and not a goal. You can enjoy creating it without caring about the outcome.